Home » Articles » Algorithm analysis: how do you do it?

Algorithm analysis: how do you do it?

Learn how to do algorithm analysis. See examples and step-by-step demonstrations of analyzes performed on real algorithms.

Algorithm analysis is an important discipline of Computer Science. It aims to provide more assertive methods for measuring algorithm performance.

As simply and directly as possible, algorithm analysis can be easily performed by empirical methods (based on practical experience), such as the time in seconds it takes to process an input. You could measure the elapsed time before and after the execution of an algorithm and, based on this result, infer about its performance.

The code below illustrates an example of this method of empirical time calculation using the Java language. It measures the execution time of the algorithm that calculates the nth term of the Fibonacci sequence (lines 15-18).

6.     System.out.println("Enter the nth term of the Fibonacci sequence");

Below are the execution times (in seconds) for some entries of this algorithm:

However, this is not the best way to perform algorithm analysis. These results were generated with the algorithm written in the Java language using the Eclipse IDE on an Intel Core i7 notebook. If these specifications changed, the results would surely be different.

Thus, the execution time of an algorithm can be influenced by several factors, such as: computer processing speed, programming languages used, compilers, operating system, to name a few.

These factors invalidate the reliability of performance results because the processing time of the algorithm can never be accurately known.

The analytical method for algorithm analysis

The analytical method is a more assertive way to perform algorithm analysis. It is not intended to calculate execution time in seconds, minutes or some other actual representation of time. It aims to find a mathematical expression to translate performance into “number of steps”. In this way, the algorithm performance can be measured totally independent of programming languages, compilers, tools and other physical factors that could invalidate the analysis.

Therefore, the RAM (Random Access Machine) model is the strategy used to measure performance analytically. It counts the steps an algorithm performs and ignores all aspects of processing speed, programming language, or any other type of hardware optimization. In this model, each operation consumes a constant and single computational cost.

Obviously, these instructions actually have significant differences in performance. Some are obviously faster to execute than others. However, as we are interested in analyzing algorithm performance based on the number of steps, the RAM model ignores such differences. Mainly because they have more to do with computers than with the algorithm itself.

By quantifying the steps generated by the RAM model we can compare various algorithms with each other and more accurately state which one is faster, because, regardless of the speed of the computers on which they are executed, an algorithm that performs fewer steps will always be more fast for large volumes of processed data.

Below is a code from a simple program that we will use as an example to begin explaining the analytical technique of step counting. To perform this process, simply count, line by line, the amount of instructions performed by each command:

Thus, we have that the algorithm performs a total of 7 instructions (the if-else are mutually exclusive). We say that T(n)=7 is the time complexity formula of this algorithm which, being a constant function, has constant complexity.

The analysis performed earlier was very easy and served only for learning. Let’s look at a more complicated example. An algorithm that, given an A[ ] array of n values, prints all the elements of that array.

Let’s dissect line by line the count of this algorithm:

Therefore, the algorithm performs a total of (2n+2)+n = 3n+2 instructions. We say that T(n)=3n+2 is the time complexity formula of this algorithm which, being a function of the 1st degree, has linearcomplexity.

Let’s go into the analysis of a slightly more complicated algorithm. An algorithm that, given an A[ ] array of n values, computes the largest value of that array. Note that the algorithm has a “for”repeating structure (lines 3-7) that performs an “if” conditional (line 4) n-1 times.

Let’s dissect line by line the count of this algorithm:

Now realize that the amount of assignment instructions (in line 5) is very difficult to predict. We do not know when the conditional on line 4 will return true, as this depends on the structure of the information present in the arrangement A[ ]. It depends as follows:

From this analysis we have that the algorithm will have two time complexity formulas:

It is extremely important to describe the concept of best and worst case in the algorithm analysis process since we can never predict the state of the data inputs that will be processed by the algorithm.

For this reason, we will ignore the “best case” concept and will always focus on doing the analysis always considering the “worst case”, because in this way we can guarantee that we will calculate the algorithm’s maximum time complexity formula. That is, its maximum execution time.

Let us now move on to the analysis of a more complex algorithm. An information sorting algorithm that uses the famous bubble method: the Bubble Sort.

This algorithm is much more complex than the previous one because it is a quadratic algorithm. The term “quadratic” means that its complexity formula is a function of the 2nd degree at “worst case”.

But let’s do the analysis to see how this happens in practice.

The Bubble Sort algorithm has the worst case when the A[ ] array is inversely ordered (when the array elements are in descending order).

4.changed = false; // 1 assignment (which occurs n times because it is inside a loop) = n instructions

Note that we consider that the repeatition structures “do-while” (lines 3-11) and “for” (lines 5-10) will always be executed. That is, we consider the worst case of executing the Bubble Sort algorithm.

Therefore, the sum of its instructions is equal to: 1 + n + 2n2 + 3 (n2-n) + n. By reducing this expression, we have that the algorithm performs a total of 5n2-n + 1 instructions. We say that T(n)=5n2-n+1 is the time complexity formula of this algorithm which, being a function of the 2nd degree, has quadratic complexity in the worst case.

But it turns out that the Bubble Sort algorithm has a particularity about the “do-while” repetition structure (lines 3-11). When arrangement A[ ] is already ordered (best case), no changes occur and the “do-while” loop is executed only once! This means that we have for the “best case” another time complexity formula. Let’s do this analysis.

4.changed = false; // 1 assignment (which occurs only 1 time, because the arrangement is already sorted) = 1 instruction

11.while(changed==true); // 1 logical operation (only 1 time, because the arrangement is already sorted) = 1 instruction

Thus, the sum of its instructions is equal to: 1 + 1 + 2n + (n-1) + 1. As we reduce this expression, we have that the algorithm performs a total of 3n+2 instructions. We say that T(n)=3n+2 is the time complexity formula of this algorithm in the “best case”. Another important aspect to note is that 3n+2 is a function of the 1st degree, so the Bubble Sort has linear complexity at “best case”. 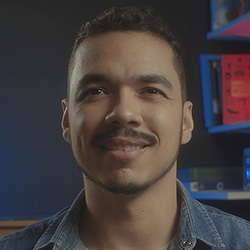 MSc in Systems and Computing, Professor of Computer Programming, Algorithms and Data Structures.

Was this article helpful to you?

Algorithm: what is it?

Variable: what is it?